We all love Bananas

I love bananas!  Other than being rich in vitamin B6, bananas are a good source of vitamin C, dietary fibre and magnesium. They’re one of the most popular fruits in the world, and many people can’t contemplate a morning without one. Bananas are also a staple food for millions of people, and a major export that forms the cornerstone of many countries’ economies.

Since reading, Harriet Lambs (Former Executive Director of Fairtrade Foundation) book ‘Fighting the Banana Wars and Other Fairtrade Battles’ back in 2009, I vowed to never eat a non-Fairtrade banana again! 11 years later and I have stubbornly stuck to my guns! The great thing is it’s now very easy to make this choice as every supermarket chain in Ireland is selling delicious Fairtrade Bananas so it’s a no brainer!

We are delighted to see the continuing growth of 20% in Fairtrade banana sales here in 2019. The huge growth in Dunne’s Stores sales of 50%, and 25% growth in SuperValu is very positive. But given their much smaller market share of just 11%, Lidl continues to be the market leader for Fairtrade bananas with 29% of total sales in Ireland followed by ALDI and Tesco. (See charts below) 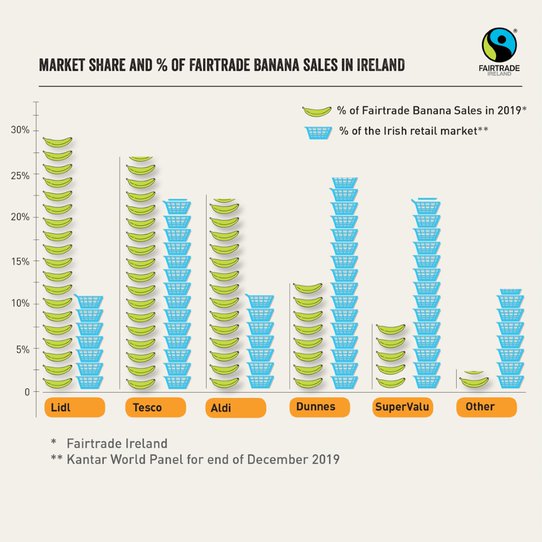 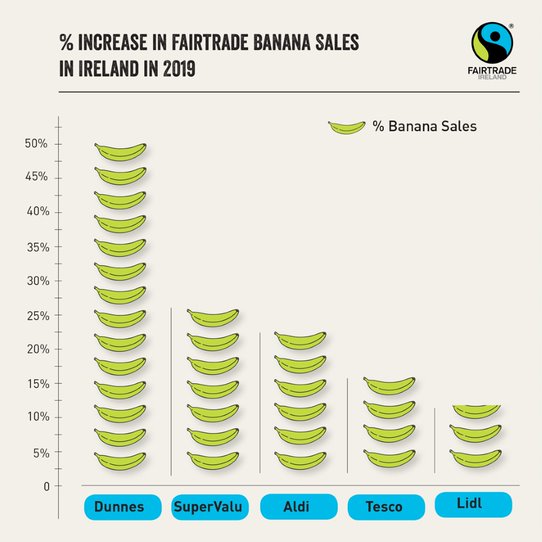 Our wish list here in Ireland is that some inspiring supermarket will make the switch to  100% Fairtrade bananas. The reason is simple; the higher sales volumes are, the more benefits accrue to the farmers.

Bananas are grown on both small-scale farms as well as large plantations. But a highly competitive market creates price pressure on bananas, ultimately putting the squeeze on banana growers.

The banana industry is labour-intensive and demanding. Climate change and plant diseases threaten yields, while large multinationals wield considerable influence in a sector that requires significant infrastructure to harvest and transport the quick-ripening fruits. Retailers often offer deep discounts on bananas, sometimes selling below cost to attract customers. Together, these factors put banana producers in a bind.

Fairtrade banana producers are paid a Fairtrade Minimum Price that acts as a safety net against falling prices. Plantation workers and small-scale banana farmers also receive a Fairtrade Premium an extra sum of money that farmers and workers invest in business or community projects of their choice. Banana farmers and workers often use the Premium to improve their housing, build schools and clinics, or offer other benefits they see a need for.

In 2018 an extra €32 million was earned by banana producers through Fairtrade sales globally. Ireland’s contribution to that is about €500,000.

Currently there are about 25,000 small farmers and workers in the Fairtrade system. Nearly all of the Fairtrade bananas sold in Ireland are also organic.

From strengthening workers’ representation to supporting farmers to mitigate the impacts of climate change, every Fairtrade banana you buy contributes to improving the lives of the workers and farmers behind this favourite fruit.