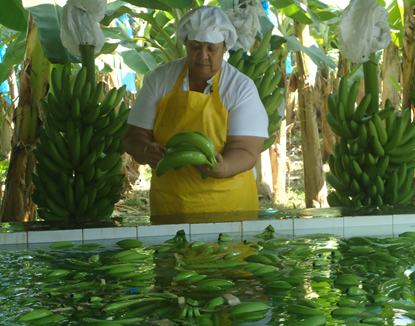 Aimeth Fernández Angulo is a banana farmer and manager of ASOBANARCOOP, a growers’ co-
operative in Magdalena, Colombia.

Aimeth grows bananas on her small farm of 1.3 hectares which produces around 67 boxes (1.2 tonnes) of bananas a week. She has also been employed by ASOBANARCOOP for 26 years, using her skills as a trained economist with extensive knowledge of Quality Management Systems (QMS) and extensive experience in business management. Aimeth has risen from head of administration to manager of the co-operative where her role includes ensuring the organisation continues to meet Fairtrade and GlobalGap certification standards. Aimeth is a member of the Education Committee which organises various training programmes funded by the Fairtrade Premium. As a member of her co-operative’s education committee, Aimeth works directly with Fairtrade on health issues, environmental workshops and programmes aimed specifically at the elderly and children.

ASOBANARCOOP was set up in 1987 by 17 small-scale farmers who formed an association to collectively export their bananas and improve their livelihoods. The association was formally registered as a co-operative in 2002 and now has 44 members, including 11 women, who farm a total of 135 hectares. The average farm size is three hectares with an average annual yield of 30 tonnes of bananas per hectare, providing 80% of farmers’ incomes. The co-operative now has five full-time employees while farmers employ 58 permanent and 673 seasonal and temporary workers for the weekly harvest and associated packing activities.

The banana industry traditionally provides around 80% of employment in Magdalena but large-scale palm oil plantations are now displacing bananas with the loss of many jobs. Farmers are under constant pressure to sell their land to big business and some unscrupulous landowners are grabbing water resources and diverting water from farmers’ land to force them to sell.

Climate change is increasingly affecting productivity – farmers face drought or water shortages and contend with adverse weather conditions, particularly strong winds and heavy rains and floods which damage crops. They are also affected by the economic situation of the country and constant revaluation of the Colombian peso. The long-term armed conflict in the region continues to generate a climate of fear and the real threat of extortion by armed criminal gangs.

In recent years banana producers in the region suffered an economic crisis, mainly related to market demands for producers to meet sustainable certification and quality requirements. ASOBANARCOOP has put in place a strategy for the economic and social development of members and their communities which included becoming Fairtrade certified in 2006 and the following year being certified by GlobalGap, the food safety and hygiene standard required by European retailers including UK supermarkets. With the support of the Fairtrade Premium, the co-operative has been able to strengthen and support its members in improving farm infrastructure, retaining certifications and marketing their bananas on better terms.

Total annual production varies between 210,000 and 315,000 boxes, depending on growing conditions. The standard box is 18.14kg so this equates to 3,800 to 5,700 tonnes. Fairtrade sales now account for around 90% of the total, with ASOBANARCOOP Fairtrade bananas available in The Co-operative, Sainsbury’s and Spar. Fairtrade sales include payment based on the Fairtrade Minimum Price that covers costs of production and an additional Fairtrade Premium of $1.00 per box for ASOBANARCOOP to invest in business and community development.

In a recent survey members were asked about the impact of Fairtrade on their lives. It found that family incomes have increased by an average of 30% as a result of Fairtrade sales, with farmers being paid at least $1.00 more per box for Fairtrade bananas that year (2012). Almost 50% of members are aged over 60 and more than 90% agree that the extra income and other benefits of Fairtrade contribute greatly to making family agriculture more attractive to younger people.

More than 90% of members also said their quality of life has improved and they have greater control over their futures and those of their children.

Meeting Fairtrade Standards was reported to have a positive impact on the environment, leading to improvements in farm infrastructure, productivity and banana quality. The decision to end the use of agro-chemicals to protect the environment has increased local employment as more workers are hired to help with manual weeding. Hired workers also benefit from higher wages, provision of personal protective equipment and access to good quality health services.

Members meet regularly to decide how to use the Fairtrade Premium, with selected projects being managed by an elected committee. The various business and social projects include: