Partnerships and the UN SDG’s

It’s bananas how – together – retailers, consumers and Fairtrade producers are contributing toward achieving the UN Sustainable Development Goals.

For decades Fairtrade has helped get fairer deals for farmers and workers in developing countries, and we are a committed driver of the Sustainable  Development Goals (SDGs).

Fairtrade is considered the best certification in the mainstream market and is the only certification that offers a minimum price and an additional premium helping farmers and their communities to build sustainable livelihoods. But Fairtrade is much more than a label, we’re a game-changer for companies and consumers who are serious about sustainability. It is estimated that since 2014 that the extra money earned by producers from Fairtrade is well over EUR500 million. 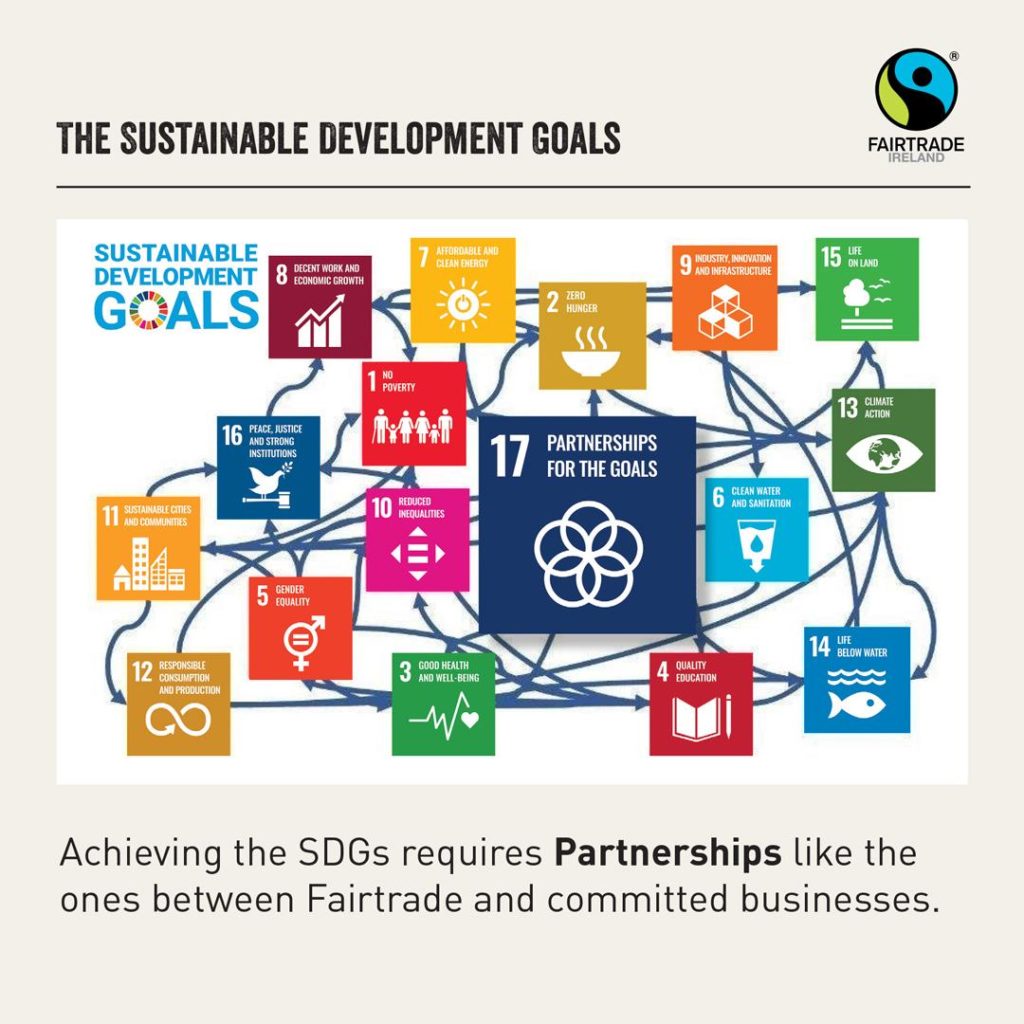 In Ireland Fairtrade banana sales have grown on average 13% over the past 5 years – in 2018 we saw 17% growth in sales with impressive growth performances from Tesco at 40% and Lidl at 27%. 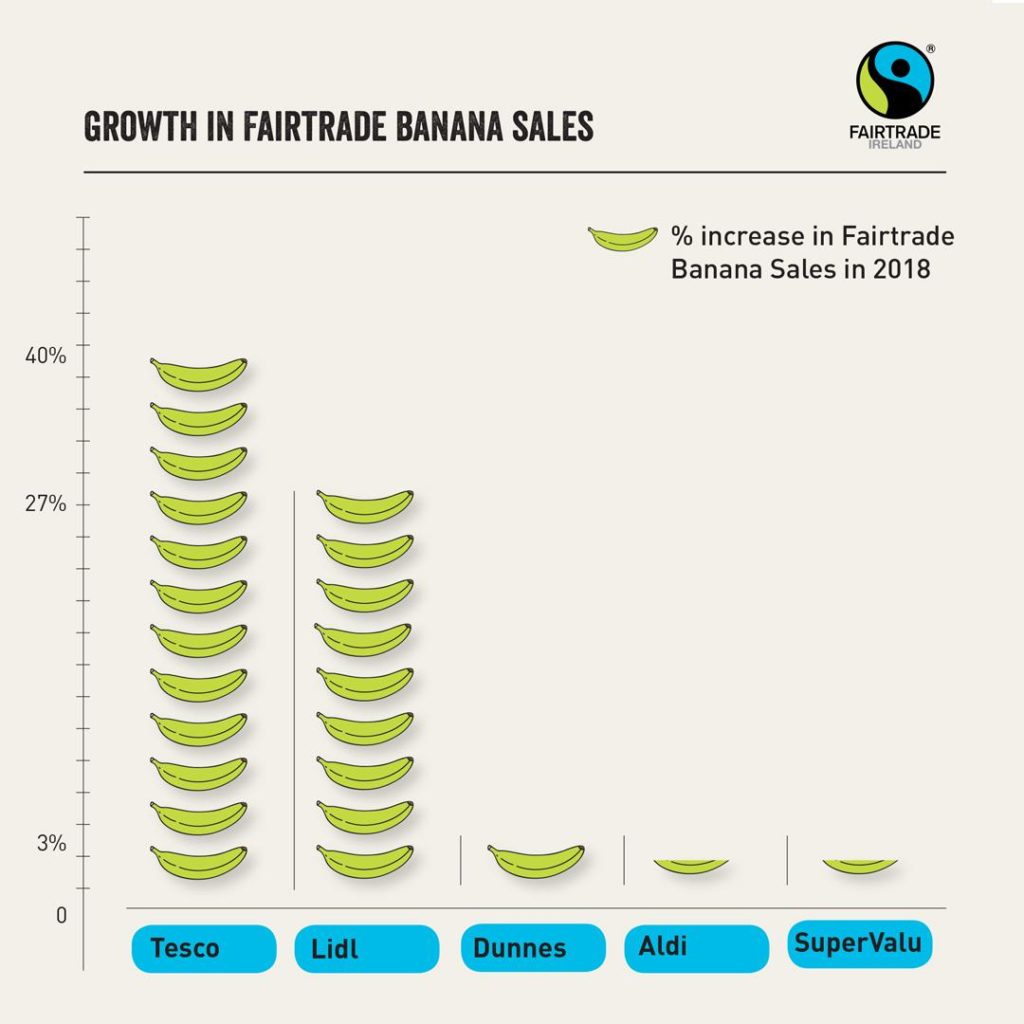 Globally in 2017, €31.3 million was paid in Fairtrade premiums to banana producers. This extra income can be mapped against the progress towards the Sustainable Development Goals.  Of this extra income, 41% of the extra money earned from Fairtrade banana sales went toward SDG 2 – zero hunger; 20% of the spend was allocated toward SDG 8 decent work and economic growth; and 11% was spent on SDG 11 projects – sustainable cities and communities  See full breakdown on page 12, of Fairtrade bananas monitoring report.

Fairtrade is an ethical standard working across the supply chain towards Goal 12: sustainable consumption and production patterns. At one end, traders and buyers are also held accountable through the Fairtrade Trader Standard  which covers transparent contracts, fair prices, openness about sourcing and market prospects, pre-financing for producers and compliance with labour and environmental law. Producer organisations are supported to comply with Fairtrade environmental and social standards.  And, through the premium paid to producers, Fairtrade and our partners are further supporting additional Sustainable Development Goals. In countries like Ireland, Fairtrade supporters are working at the consumption end of the value chain encouraging family, friends, colleagues and companies to buy on fair and sustainable terms.

Retailers and the Sustainable Development Goals

The majority of Retailers in Ireland are making some progress towards implementing the UN Sustainable Development Goals. Tesco, Lidl, Aldi, Musgrave (supplier to Supervalu and Centra) and BWG (more recognisable as Londis and Spar) have made commitments to Goal 12, Responsible Consumption and Production at a local level through the reduction of food waste.  Lidl through their supplier, Global Fruit, were the first to remove the plastic packaging from their Fairtrade organic bananas and have since been followed by SuperValu/Centra, who are part of the Musgrave group, through their supplier Fyffes.

The sustainable development goals are becoming the global benchmark for sustainability and last month, Minister Bruton announced that Musgrave’s was selected to become one of Irelands SDG Champions. We would like to think that in their role as SDG Champions, that their Fairtrade organic bananas sales in 2019 would increase. In the future we would hope to see all retailers selling really significant volumes and up to 100% Fairtrade. This step has already been taken, by the Londis store in DCU. They are now selling 100% Fairtrade bananas in store. We’d hope to see more Londis’s and Spar’s follow in their footsteps which would not only increase Fairtrade banana organic sales, but enable us to make more progress with BWG toward our commitment to SDG 12. 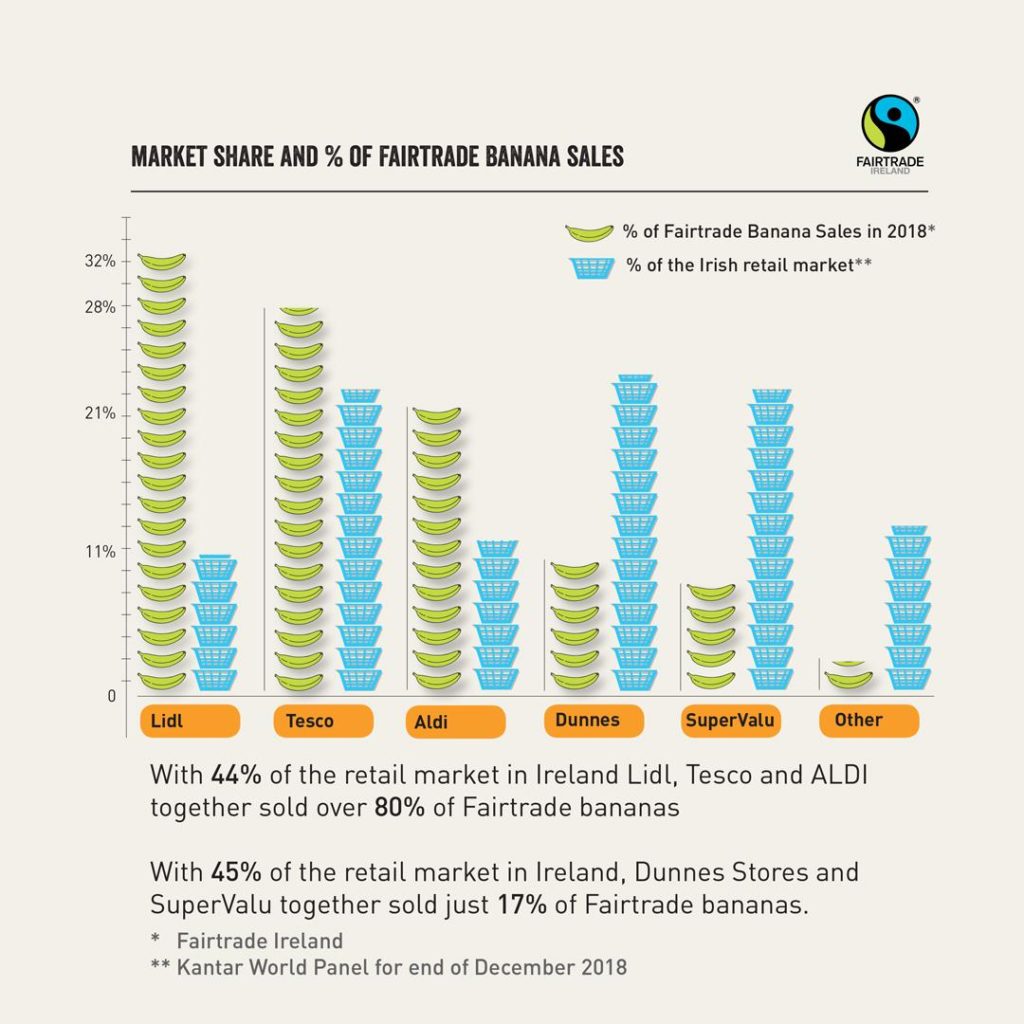 Who Pays for responsible consumption and production?

While we do recognise the challenges that retailers themselves face in a cost competitive market, we think everyone in the value chain should help to cover the extra costs and the consumer is already paying a premium for Fairtrade organic bananas.  There is a cost associated to sustainability, the real question to be asked is to how willing are retailers and others to carry these costs? Are these costs to be consolidated in their financial accounts where environmental and social value are seen as a return on investment, the investment into a more sustainable future?