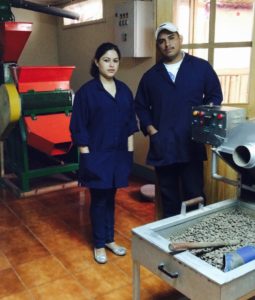 Heydi and Haris are working in the Soppexcca coffee cooperative, Nicaragua. They both work in a chocolate factory in Jinotega, which was set up by the cooperative as a diversification project.

Heydi Janeth Espino Mairena was born in the village San Francisco de Los Cedros in Jinotega, Nicaragua in 1993 to two coffee farmers who are members of the Fairtrade certified coffee cooperative, Soppexcca.

From a young age Heydi helped out on her parents coffee farm during the harvest. She has completed many courses, thanks to financing by Soppexcca, including chocolate making techniques; norms and standards; microbiology; cocoa tasting; trade fairs and negotiations; administration and costs calculation; and traceability of food chains.

Since 2010, Heydi has been working for Soppexcca in their chocolate factory – a diversification project which was set up by Soppexcca as an addition to their new café in Jinotega. There, Heydi is responsible for the chocolate production.

Heydi is also due to study accountancy in her local university later this year.

Haris Ulises Lopez Picado was born in the village of El Salto in Jinotega, Nicaragua in 1989 to two coffee farmers. Haris’ parents are still active members of the coffee cooperative, Soppexcca, where his brother is also a barista.

After finishing school in El Salto, Haris worked for several years on his parents coffee farm. He then got a scholarship from the cooperative to study at university. He studied for five years at the university UNAN León Jinotega to become a secondary school teacher.

Haris was given the opportunity to take part in a pilot rural development project, financed by Soppexcca and the Nicaraguan government. He took courses in natural resource management, coffee cultivation and sustainable agriculture.

For the last four years, Haris has been working with Heydi at the cooperative’s new chocolate factory. At the factory they produce various chocolate products, and have just had their first export to the US and Germany. The factory is in the process of becoming Fairtrade certified.

Haris believes that Fairtrade has had numerous benefits to him, his family and the community. Thanks to Fairtrade Soppexcca can “pay higher prices for the coffee and offer special programmes for young people, training them in the cultivation of coffee. The cooperative has set up various social projects, including the construction of a school. They have also improved the road from the town to the village and support the community when landslides occur (blocking the street). The cooperative are also running various environmental activities”. 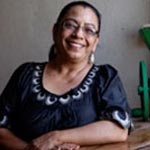