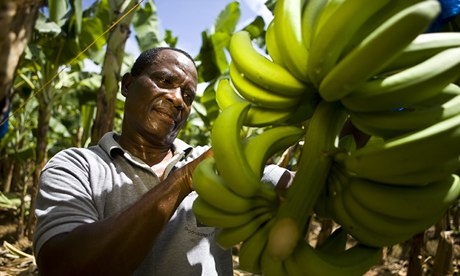 Stephen Best is a banana farmer from the island of St Lucia in the Eastern Caribbean. Stephen’s farm is about 7 hectares, 5 of which are used for banana production and 2 for growing vegetables.

Stephen is also Chairman of the Windward Islands Farmers Association (WINFA). WINFA was Fairtrade certified in 2000 and has a membership of around 3,500 banana farmers. He is also Vice Chair of the St. Lucia National Fairtrade Organization, and Chair of the Mabouya Valley Fairtrade Group.

“My involvement with the umbrella producer organization body, WINFA, entails keeping producers in the Windward Islands constantly aware of the production and marketing problems and measures that should be embarked upon to address those issues so we can maintain market space. It also entails engaging in advocacy and giving pursuit to deepening the collaborative process with local, regional and international organizations in order to create greater awareness of the significance of Fairtrade to small producers” – Stephen.

More than 85 per cent of bananas grown in the Windward Islands are Fairtrade certified. Fairtrade Standards ensure farmers receive a price per box of bananas that covers their costs of production. In addition WINFA receives the Fairtrade Premium of $1.00 per box to fund community improvements and business development, including diversification into other agricultural products and income generation schemes.

How Farmers Have Invested the Fairtrade Premium

Why Fairtrade in Important in St. Lucia

Liberalisation of the global banana trade has put the Windward’s banana industry under increasing competition from lower-cost bananas grown on vast plantations in Latin American and West Africa. These bananas are on the frontline of a 10-year supermarket price war in the UK which has resulted in loose bananas today selling for almost 50 per cent less than in 2002, devaluing them in the eyes of shoppers. This continuous downward pressure on prices makes it hard to see how anyone could be making a profit, or where investment in a more sustainable and fair banana industry for the future can come from.

Low retail prices mean farmers like Stephen struggle to cover the costs of running small family farms that use more socially and environmentally friendly methods with fewer agrichemicals but have higher overall costs because of the hilly terrain, lower yields and higher transport, quality control, and labour costs.

For plantation workers, low retail prices mean long hours, low wages, trade union repression, poor health and safety standards and intensive use of agrichemicals which are harmful to both workers and the environment.

The EU Banana Regime has traditionally given preferential treatment to imports from the Windward Islands and other former European colonies in recognition of the importance of the trade to their economic development. But in 1996 Latin American banana exporting countries and the US lodged the first of a series of legal challenges at the World Trade Organization complaining that the EU regime discriminated against Latin American producers. A new agreement signed in December 2009 resolved the long-running dispute and cemented the process of opening up the EU market to increased imports from Latin America by reducing the duty paid on them.